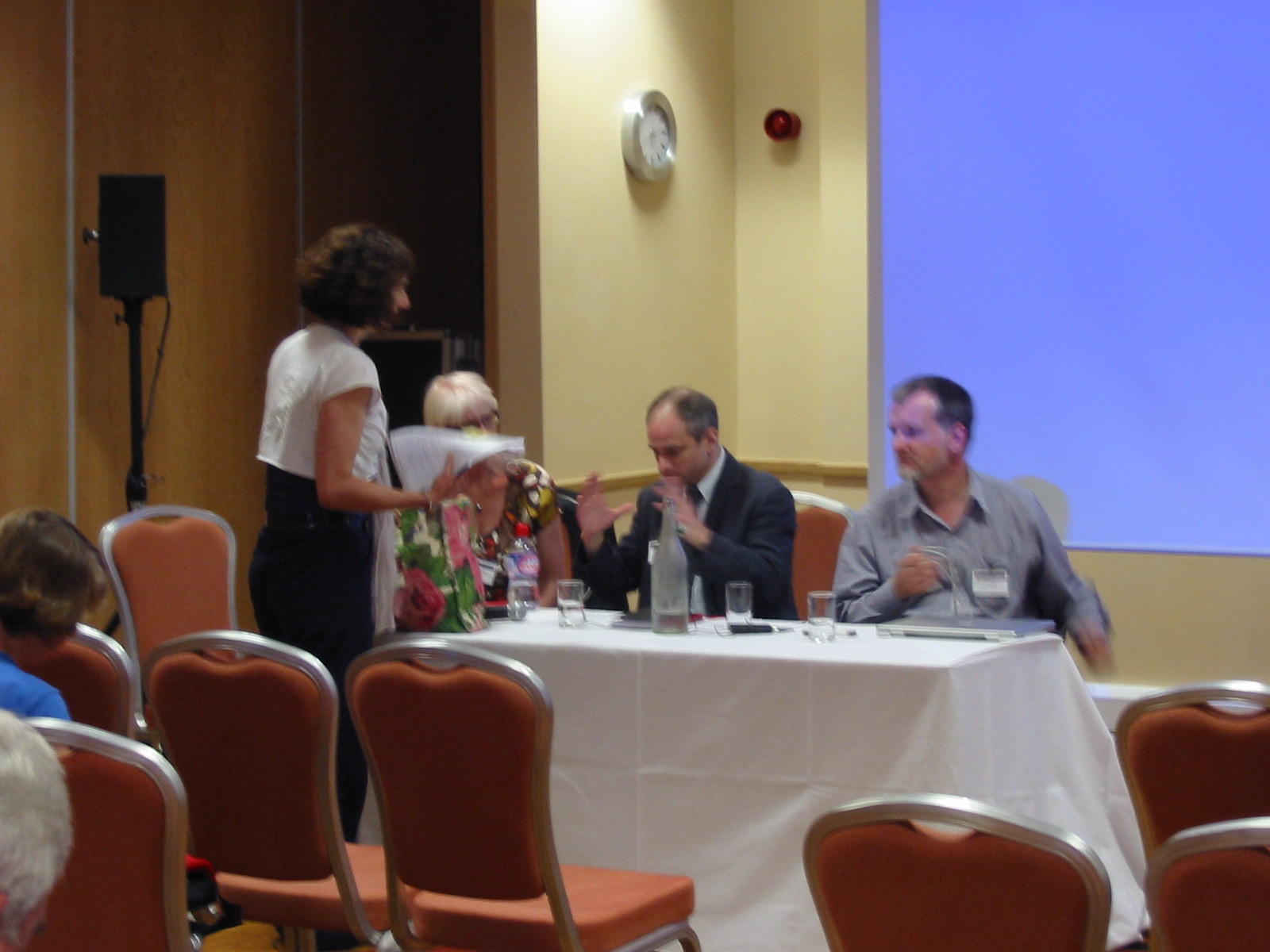 The session was introduced by Joanna Newman from the British Library, who made the point that this session was extremely timely, given the transformation of DIUS into DBIS.

First up was Simon Whittemore from JISC, talking about JISC’s business and community engagement programme. It was a fast and furious tour through JISC’s work to enhance partnerships, including a brief guide to the business information resources project with the British Library.

He started by asking the question: What is business and community engagement? The answer was, in a nutshell: partnerships, particularly strategic partnerships. There are several closely related strategic areas: knowledge transfer/exchange, employer engagement, public/community engagement and lifelong learning. And in terms of institutional activities or services, that means things like CPD, consultancy, public lectures/events/festivals, community-based learning – it’s a huge range.

JISC is trying to encourage institutions to understand who their customers/partners are, with the end objective of benefiting society as a whole (for example an innovative business economy, social cohesion, etc). Simon also gave a swift overview of the policy documents driving this area, and the diversity and scope of engagement.

The JISC programme itself is a £6m, three-year rolling programme, across six streams. Its key aims are:

The key principles include cross-pollination, co-creation and co-development. And the benefits are many – competitive advantage, helps with managing and adapting to change, added value to name but a few.

So far, JISC has run workshops to try and understand where people need support (externally and within institutions). Issues that have shown up are access to resources and expertise, developing capability, FE-HE good practice exchange (FE is ahead in employer engagement area for example). The barriers are often perceptual (ie cultural and organsiational) rather than technical – it’s often an issue of packaging/presentation and terminology. There’s also a discoverability and demand issue.

Simon then touched on the SCG Grey Literature Report, followed by the British Library Business Information Resources study project. The latter aims to explore the feasibility of institutions acting as regional hubs for the provision of business resources in partnership with public libraries and RDAs – providing things like business metrics, economic data and expertise. It needs to enable both remote and walk-in access, and also faces the issue that there’s a vast amount of information available, but navigation can be difficult.

Other important projects include: Digitisation, curation and two-way engagement (a feasibility study on the advantages of collaboration on digitisation), and SME e-empowerment.

Simon was followed by Sarah O’Donnell, head of corporate development at Manchester Metropolitan University (MMU), who explored some of the benefits, challenges and opportunities involved in public engagement, focusing on three projects run by MMU.

She told us that MMU sits in the middle of a deprived part of Manchester, and that community engagement is central to the university’s mission.

Sarah made the point that the benefit of social media in public engagement was very significant, as it increases the possibility of new voices and ideas being heard. MMU is part of the Beacons for Public Engagement partnership – it’s a £9.2m public engagement project that focuses on how you change the culture in your institution to reward academics who want to take part in this kind of work.

Manchester’s focus (and this includes Salford University and Manchester University, as well as MMU) is listening to its community. They took the stance of not defining who their community was.

What are the challenges?

MMU decided to use new methodologies, particularly in their Mapping Creativity project to map Manchester.

Using social media networks (blogging/twittering etc) it sent out message to everyone to ask: what are your ideas? A £25,000 prize was on offer to deliver their project, with academics working alongside. A simple criteria (250 words and an image) lowered barriers to entry. A ‘Dragons’ Den’ style competition was held where 12 finalists pitched their ideas, and the winning project is now up and running, led by a community group.

MMU has also built a MMU community website, with the concept of “looking over the wall”, and asking “what on earth goes on there?”. It’s hoped that the new campus which MMU is building will be a big feature of the community website.

MMU’s third project used X-factor methodology, to choose a community project. They held a competition for six ‘public engagement fellows’ who would each get £10,000 to take forward a project – but only if the project was developed with the community. People sent ideas in, and it was put to a public vote on their website.

Sarah concluded with some important lessons:

The third speaker was Paul Lowe from the London College of Communication, part of the University of Arts London. He presented us with three case studies of projects:

Paul first of all gave us some background – lots of websites are now appearing where the interface between journalists/amateurs is not mediated by gatekeepers (eg traditional media like The Guardian). Some examples include:

London College of Communication is based in the Elephant and Castle area, which is in the middle of a multimillion pound regeneration project.

Their documentary project (the Elephant Project) came out of the practice-led MA, and will run for around 10 years. Each year a theme is set, and students go out into the vicinity around college and shoot their story. The students go out and interact with community to determine the concepts behind what’s photographed. An exhibition is then shown each year in the local museum to draw the community in.

This project aims to build an online community of practice around photojournalism. Paul made the point that there’s critical debates going on at the moment over issues like truth and ethics, but there’s very few spaces in which this type of thinking and critical reflection can take place.

The project sits in the middle of 4 major players:

Q: To Sarah: You had to drive people to the website because they wouldn’t fall over the MMU website normally – how did you do that?

Sarah: Using social media: we got the community groups that were working with the academics to twitter, and use social media networks to spread it out as wide as possible.

Q: To Sarah/Paul: How much are your initiatives are embedded within an institution, or do they depend on project funding (and are therefore more likely to be axed in the current economic climate)?

Paul: The KT partnership is government-funded. The Elephant Project is an assessed part of the curriculum, so goes on even if people don’t fund it. The dissemination, however, is project-funded and this can be a struggle (even within the institution). The Open-i community is JISC-funded, with the hope of it becoming self-supporting when that ends.

Sarah: We don’t envisage doing our projects again, but the beacon has helped us realise it’s about the change within the institution rather than the particular project. So from the start we’ve engaged with the absolute top of the university to make sure this change is embedded. We’re also considering using the contribution point to reward people for financially for doing this, or releasing them time-wise.

Simon: It’s a 20-year change programme, that can’t be achieved in the short term – a slow process.

Q: How do you reduce the risk of this sort of community engagement actually enlarging the digital divide rather than reducing it (eg the MMU project making large use of social networking)?

Sarah: The public engagement project was driven by technology to bring new audiences, but yes, not always the whole audience. So there’s lots of face-to-face stuff that needs to be done too, that we do at lots of different levels.

Paul: Some of the Elephant Project will be focused on going into community with the technology (media labs) to overcome this.