Three speakers outlined their programs to help those running digital preservation projects and raised some thorny questions relating to the potential problems that can arise from public private partnerships. They were William Kilbride from the Digital Preservation Coalition,  Sarah Higgins from the Digital Curation Centre and Richard Davies from the  British Library who has been working on the Life Project. 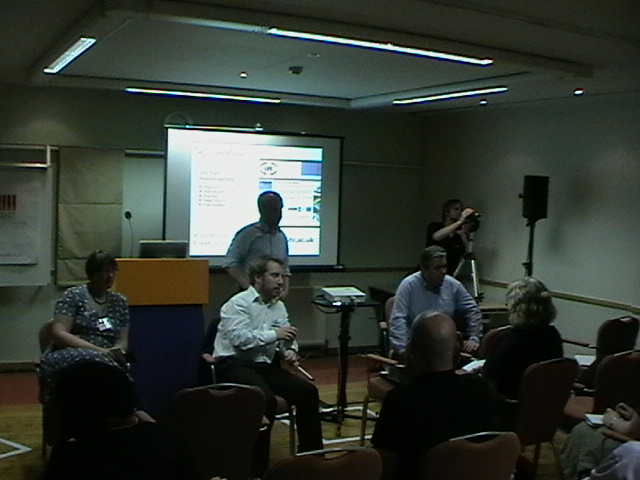 Promising that he was going to “rattle through” the large amount of information he had to convey, William Kilbride gave an overview of the work the Digital Preservation Coalition  carries out to help in the process of digital preservation, and of the interesting results they have gained through asking institutions a series of questions about their work processes.

These, he said have raised some real issues even  though they are just basic who, what, where, when, how questions (Who are your users? Who maintains it? Where is the master copy of the data and original content? When – how long do you expect it to be available for? What happens id things go wrong? How will the creation be created? How will it be maintained?).

He said that there seemed to be a particular lack of definition when it came to timeframes. When the DPC asked institutions how long they expected their digital material to last, they they got answers as vague as  “forever or three years” also “in perpetuity”. While others said things like “after ten years something will happen” without really knowing what.

There is clearly a need for more long term risk assessment. Most pertinently, given the optimism about private partnerships in earlier talks in the Managing Content Strand, he also warned that partnerships can be a big problem when it comes to preservation. DPC had come across examples when when partners had no agreement over who was in charge, examples of when the preservation partner folded in the middle of the project and of poor delivery between the delivery vehicle and the archive.

“The brutal truth is that archives are at risk of disappearing,” he said. “It’s very difficult to enforce contracts on organisations that no longer exist.”

He also noted that it was becoming apparent that the request JISC often puts in place asking for minimum five year rule for access to content has become problematic because institutions often see that as a maximum – and suggested it might be more useful to leave this term out of contracts.

He finished with the important warning that although it’s right that projects focus on short term users, it’s also vital for them to focus on long term users.

Sarah Higgins also characterised her talk as a battle against time, saying that it normally took a minimum of half a day (and sometimes several) to introduce the work of the Digital Curation Centre.

Stressing that digital materials are fragile – and that they themselves are soon likely to need curation – she introduced the lifecycle model that DCC have built up to help insitutions run their projects and provide a guide so to help plan activities and make sure . to help plan activities to make sure all necessary stages are undertaken in the correct sequence. It’s freely available for detailed perusal here.

She noted that while it’s helpful to have preservation planning procedures in place from the very start of a project, it’s also never too late to start them. Also, while the DCC models may seem to have a daunting array of steps and procedures, many of these can actually be automated.

Like many others at this conference, she talked about the importance of embedding preservation policy within institutional frameworks and finished with an overview of the tools and services that DCC run that are all available for viewing here.

The ‘Life’ in ‘Life Project’ stands for Life Cycle Information for E-Literature. “It’s important for an JISC project to have a cool acronym, you see.” said Richard Davies.

The project has developed a methodology to model the digital lifecycle and calculate the costs of preserving digital information for the next 5, 10 or 20 years, which will help organisations apply this process and plan effectively for the preservation of their digital collections. “There is,” said Richard “a thrilling 120 page report  – I’d recommend it!” (It’s available on the Life Project website)

Joking aside, he made a strong case for the importance and usefulness of this project’s work, its findings with relation to the costs in setting up repositories and the costing models that are now freely available on the website. These are tools that “will allow you to feed in content and organisation profile – and will feed through cost prediction models for each of stages and map out an overall lifecycle”.  It thus provides vital  help with scenario planning, and also gives insitutions a really useful way to justify the level of funding they need.