In a session in which approximately 70% of delegates were librarians (according to a quick show of hands) we discussed the role and nature of libraries in the future, and watched a fascinating video produced by JISC (available to view below).

Key points raised in the session:

Richard Ovenden from Oxford University began by explaining how technology is changing the nature of libraries, and the issue is particularly relevant in HE.

Questions Richard believes we should be asking:

Richard then raised a few chuckles with some gentle humour at Oxford’s expense:

Q: How many Oxford dons does it take to change a lightbulb?
A: Change? What’s change?
Or, alternatively:
A: Lightbulb? What’s a lightbulb?

Oxford has, of course, a reputation as a very traditional institution. But despite this, it has taken a very forward-thinking attitude towards its libraries.

Oxford is planning a new humanities library, a special collections library, and a book depository in Swindon. It has also just scanned 400million pages of academic journals through a collaboration with Google.

People worry that students are abandoning libraries in favour of Google and other search engines, but we should remember that Google doesn’t create or store information – it is only a gateway to information. It is an opportunity, not a threat.

Technology can help enable change, but also people have to adapt to the technology changes. To illustrate the issue, we were then shown an excellent short film from JISC, which you can watch here: 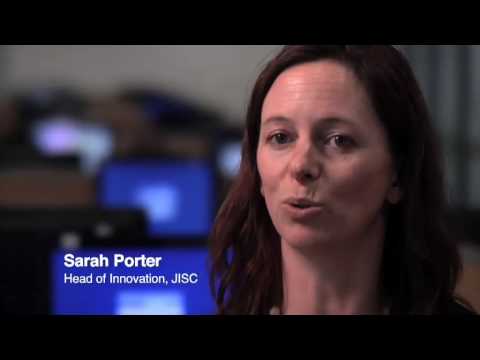 When we think about designing spaces we need to think of the needs of 21st century learning. Libraries are part of learning infrastructure.

‘The best things in life are not things, they’re experiences’.

We need to think about how to make libraries more experiential – what happens outside the classroom is more important than what happens inside.

Les read a passage from a book describing a grim visit to a McDonalds as an illustration of how spaces can have an emotional effect on us, and then he quoted John Ruskins: “buildings should shelter us but also speak to us.”

Libraries should speak to us about our ideas about education – we should play to the diversity of our students.

Libraries shouldn’t be based primarily around library operations, but neither should they contain gratuitous social spaces. They should be ‘third spaces’ – spaces that are not work or home, and where people can be part of communities.

Peter Godwin from the University of Bedford then took the floor.

The aim of a library is to: guide, challenge, provide access and educate.

But the key to the future of libraries is the changing needs of students. Student technology use is often ahead of libraries – a point Peter backed up with a photograph of a student sitting on the floor of a library so that her laptop could reach a plug socket. ‘Clearly not a use the library architects had intended,’ noted Peter.

We must embrace outside technologies: Facebook, Youtube, Instant Messaging, Podcasting, Vodcasting. Library catalogues are going to have to become more like Amazon and Google. We need to be compatible with mobile technologies.

Information literacy isn’t a subject, it’s a way of embedding learning. Peter accepted that the topic was big and messy as it involved trying to change learners’ habits.

“We need to be doing more for children in schools, and school librarians’ relationship with teachers is a crucial part of that,” said Peter.

To summarise – we need a library 2.0 mentality that has its foundations in the new and evolving needs of learners.

Richard Ovenden: “Les, are there any useful exemplars of libraries that have been doing it well?”

Les Watson: “The Glasgow Caledonian Saltire Centre ‘rewrote the guidebook for academic libraries’, according to the Guardian. The TLC in Bedford is another good example. However, any library should be seen in the context of learning and teaching strategy. It’s about diversity and difference.”

Delegate: “I see echoes with the newspaper industry. There is anxiety and rage about the new technpology, and the anxiety is about irrelevance.”

Delegate: “What’s missing in the video is anyone who looks like a senior politician supporting the issues. Where will the future funding come from? It’s a critical issue. The libraries will need to react to the changes in the universities as well as reacting to students.

“And as for the McDonalds example – McDonalds is very successful, and they don’t need to give lessons in ‘eatery’. So perhaps the notion of emotional reactions to spaces is a subjective view. And finally – if libraries didn’t exist, would anyone bother to invent them?”

Les: “I wouldn’t invent them in their current form. We need to rethink the whole thing. The McDonalds example was to demonstrate the emotional effect places can have on people. People need a space to be lifelong learners.”

Peter: “No we wouldn’t invent them as they are. Libraries are centres for learning: in groups and also individually. Things are going to change, but we don’t know how quickly things will change. librarians have to brand themselves.”

James Curral, University of Glasgow: “I wouldn’t call the Soltan Centre a library.”
Les: “It is a library.”
James “We’re talking about teaching and learning space, about study spaces. Why call it library? Peter is very keen to badge and label information literacy, but to me as a teacher it’s not something that librarians have to be involved in.”
Les: “It had to be a library – it would not have received funding otherwise. It is a hybrid building. It is flexible, it could be anything. it has to fit the future.”
James: “You built in space and transition, so it can mutate into something else.”
Peter: “Not all academics are good teachers. we need to help them with information literacy.”

Delegate: “Should we look at shifting libraries from physical spaces to virtual spaces, and colonising others spaces?”

Peter: “The library is where you want it to be, wherever you are. Students expect us to fit their workflow, not their educational providers.”

John Naughton at Open University: “This discussion is at the wrong level. Regarding the analogy with journalism – print journalists insist that what they do is really valuable and society needs it. Same applies to librarians. Society needs education, but the form in which it takes will have to change. Librarians have a serious role to play in a reconceptualised education process. And no one is thinking hard about that process.”

3 replies on “JDCC09: Looking into the future: Libraries”

Incidentally the comments attached to David above should really be Peter!!!I’ve been called many things before but not David!

I’m glad to have the chance to add to the last comment which was in fact from John Naughton at OU and he put his finger right on it, and despite the hot weather, I have been reflecting on it ever since.
Librarians have to work in the Universities as they find them. We can try to be “digital warriors” etc etc and try to change practices, but the fundamental shift that John was talking about is so huge.There are many prophets of change (eg Michael Wesch, Don Tapscott)and who knows when the recession’s effects will filter down to us. Therefore it is hard for librarians to be strategic, yet that is what we need to be faced with the speed of technological change, and increasingly sophisticated and diverse user expectations.
Therefore the kind of library that we plan for has to be at the centre of this realigned new style University – whatever it looks like.

James / Peter – many thanks for the comments, those changes have now been made.