Various events earlier in the summer gave the BBC the chance to parade their plans to digitise their entire back archive of televisual material. (Although it’s interesting to note there is little info on this on the BBC site itself, particularly on its archive pages). 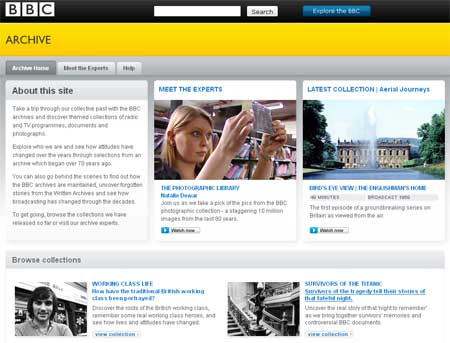 The plans are not new. Back in 2006, there were reports about this as well.

As often happens when the BBC gets involved, other providers are might be a little nervous about the effect of this.

With the power of the BBC brand and its related marketing strength, and the undoubted brilliance of technologies like the iPlayer, does this not mean that all users, irrespective of background, go straight to the BBC for their video content, rendering the offerings of other content providers somewhat useless?

Other content providers, such as JISC-funded projects like Newsfilm Online or InView will certainly have to work harder at persuading users to visit their site. However, compelling reasons do exist for getting those users to come.

So that all goes to show there are plenty of reasons for users to work with video content beyond that made available via the BBC (which it should not be forgotten is only talking about these plans for digitisation at the moment).

But other content providers need to have focussed marketing and communications plans to ensure users are aware of this.

3 replies on “Will a BBC video archive swamp everything else?”

I’m an employee of the BBC, but the following are entirely my personal comments. I think the above comments are missing one very large point (and the whole point of the Internet): the issue is not online BBC content VERSUS the JISC initiatives listed above. The critical issue is how they all work together, by agreement on common interfaces and metadata. People in general don’t search dozens of individual sites: they use metadata (through a union catalogue or search engine) to try to have the broadest and best single enquiry mechanism. If people have to find the specialist site BEFORE starting a search, then that site’s usage will be forever limited by its own obscurity. I hope the joint BBC-JISC participation in the Strategic Content Alliance and the CenturyShare project will concentrate (and concentrate minds) on integration of content, not competition.

Hello Richard, and thanks for your comments.

You are right to point out that the Strategic Content Alliance, and in particular the CenturyShare project, which will be bringing together digital content from different public sector bodies, e.g. BBC and JISC-funded projects in Higher Education.

Such initiatives will certainly help with the problems outlined in the blog article.

However, the gravity of brands like the BBC (as with Google) is strong. They draw all types of users in and because they provide some very good services, users are often satisfied with what they provide, and feel no need to explore elsewhere.

But this puts a lot of pressure on the BBC to deliver others’ content; and the Beeb could easily turn round and say that is not its task in the long term. And this would lead us back to the original problem.