I thought it might be interesting to look at some material for those out exploring during International Women’s Day.

I ran some searches on the UK Medical Heritage Library collection on Historical Texts and I found three texts which are interesting for the amateur, but they could start a whole new area of research for the serious scholar.

The Reports regarding practicability of giving instruction to female students within the wards of the Royal Infirmary documents the deep concern about the ‘promiscuous’ attendance of female students alongside their male counterparts. It is astonishing to read about the ‘care’ being taken in considering if women could even be admitted to the wards for training in medicine. We have come a long way since then as it is notable that, in 2020, of the 300 thousand practicing doctors in the NHS 140 thousand were women.

The project to create the UK Medical Heritage Library was undertaken as a partnership between Welcome and Jisc. We also worked with nine university and professional association libraries to digitise a wider variety of books and reports. The Royal Infirmary report came from the University of Glasgow’s collection. All UKMHL texts were digitised by the Internet Archive team located at the Welcome Collection. 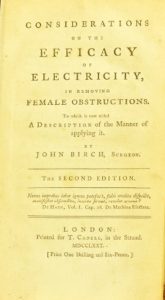 The next interesting item is Considerations on the efficacy of electricity, in removing female obstructions, published in 1780 and drawn from the collection of the  University of Bristol’s Library, which details the use of electricity instead of surgery for curing female gynaecological ailments. It is not only ‘shocking’ (excuse the pun) but it is also alarming that men were so keen to experiment with such cures. The language is most flowery, and the author does not directly state for what he intends to use the shock therapy until page 11. It turns out he promotes its use to aid the flow of a woman’s period which has become obstructed. 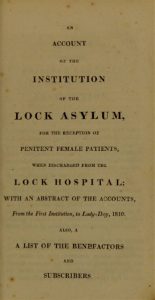 Finally, we come to another informative artifact from 1810. An account of the institution of the Lock Asylum examines outcomes for women suffering from syphilis at the Lock Asylum, part of London’s Lock Hospital. Again, the language is incredible in its deeply moral tone. The outcomes of the hospital’s regime were mixed, with many women not responding to ‘treatment’ much of which seemed to be about reforming rather than curing them.