It’s been a couple of years since the end of the JISC’s Enriching Digital Resources programme.

The programme funded 25 projects, 24 of which were either digitising new content or enriching and clustering existing digtial resources.

Given the concern JISC has for sustaining digital resources, we thought it we be good to run a quick survey to see how the resources were bearing up after a couple of years. Was the content still on the Internet, and could it still be used?

Details on the methodology (admittedly quite rough and ready) are included further below, but here are the results, classified according to (an equally rough and ready) JISC Sustainability Index. The index ranks how usable a resource is for educational use – it does not judge the quality of the content, but rather the functionality and interface of the website that houses the content.

The results are largely pleasing.

It’s good to see that none of the resource have disappeared from the Internt. Equally encouraging is the fact that 88% of the resources are at least good enough for educational use, if not better.

Nevertheless, that there are 12% of resources failing the test is a little disappointing. We’re not highlighting which projects failed the test, but sometimes the errors were very straightfoward and could be solved quite quickly, e.g. the link to the search page not working.

This demonstrates that just a basic level of engagement by the creators with their resource once project funding has ceased may well be enough to keep the resource usable. Equally, a few minor tweaks would be enough to raise a site from being usable to being good.

The overall results are charted here, with each column representing the number of resources classified under each heading of the Sustainability Index 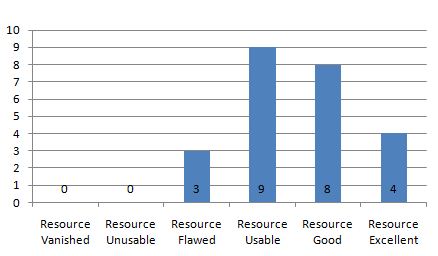 3 programme managers (with varying degrees of engagment with the original JISC programme) from JISC went through each of the 24 resources rating them according to the JISC Sustainability Index. The results from each manager were then averaged out and the result assigned to each of the resource.

The index is below.