Catherine’s presentation was designed to outline the JISC vision for a national content collection, reflect on the last ten years of the JISC Content work, talk about the achievements of the JISC mass Digitisation Programmes, and discuss the many challenges ahead.

Watch the speaker on video.

Catherine Grout kicked off with an amusing trip back to the past – to 1989 when mobile phones were bricks and the ‘worm drive’ with a whopping 256mg capacity was the storage device of the future.  Between 1989 and 1996 JISC took its first steps and then great leaps towards digital content. Catherine became the second member of the content team. It now has 15 staff working on digital content alone.

And there’s an awful lot of work for them to do.

Catherine moved on to give a rapid overview of JISC’s digital content projects and achievements. No mean feat since there is so much going on now. £24 million has been invested in digital content, helping build up a great wealth of resources. (Get a taster of them here)

In the JISC collection, for instance, there are more than 50 digitisation projects, 7000 online journals, almost 3,000 ebooks – and more thousands of research papers.

It is, she emphasised, a rich, varied and fascinating set of content. As you can see quickly by clicking on www.youtube.com/jiscmedia. Here a collection of showreels demonstrates the breadth and depth of the work that is going on.  The footage also shows how, as Jon Snow points out here, such material can bring politics, current affairs and history to life. And it can do it for everyone – not just specialised researchers. 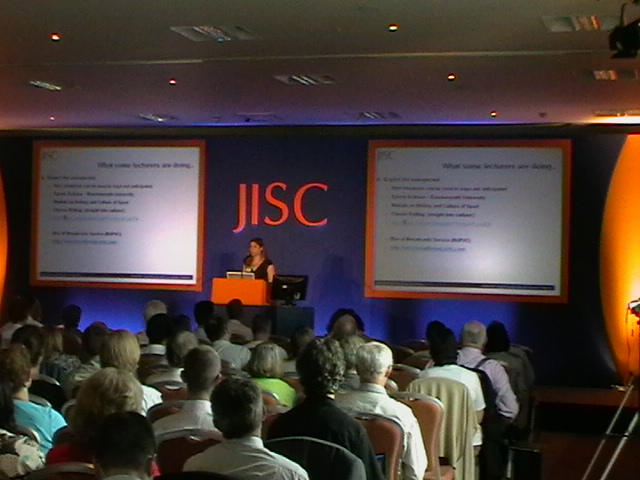 Moving on, Catherine raised a few of the interesting questions that JDCC09 will tackle.

For instance, how do we put all this wealth of material together and use it?

She noted that the main problem she had preparing for her talk was working through the sheer number of resources to hand, accessing them all and extracting from them in a way that made sense.

She also raised the thorny questions of ownership and access. Are there things we should all own as citizens of the world? She gave the example of the music John Williams wrote for Obama’s inauguration, which she had great difficulty getting hold of before her talk, as it appears to have been fenced off by news organisations and copyright holders… and couldn’t indeed play because it would have taken too long to convert the file and etc.

This “flood and deluge content” coming online will also, said Catherine, have a huge impact on the research of the future. It is already having an impact, in fact. So many various resources can be accessed so easily now that they are bound to provide new historical insights. Where once, say, a diligent historian would have been able to find one newspaper article about his subject after weeks of searching, now multiple, potentially conflicting reports, are instantly available. The readier availability of sound and visual material will also change the way we interact with history. It is suddenly more dynamic.

All of which is very positive – albeit potentially terrifying for scholars who could see their work suddenly cast aside and out of date.

The impact on learning and teaching

As well as changing the face of research, the new wealth of digital material is also having a big effect on the public and schools. Resources like freezeframe.ac.uk provide images that appeal to everyone, not just researchers for instance. Meanwhile recent work on the First World War Digital archive , has seen huge public engagement with 6,000 people contributing materials in their possession for digitisation.

There is also, Catherine added, the important fact that  “most students find online material more engaging than printed material.” These are teaching resources that the web 2.0 generation find easy to use and more interesting.

Most excitingly, people with access to the material will use it in ways that those who put it up can’t even imagine. “Expect the unexpected” said Catherine, regarding the hidden impacts digital material can have on learning. She then showed a film about cheese-rolling that a lecturer in sports science used to engage students who originally thought that they wouldn’t be interested in the historical aspects of their subject… Which neatly made the point.

Access to digital resources doesn’t just help people in the community learn about specific events. It’s also useful in that it teaches them how to engage with various programmes, image capture techniques and how to use digital media content in general. It builds skills and knowledge.

It’s a challenging time for digital content providers and institutions. There’s going to have to be hard thought about priorities and how to cope with the current state of political and economic flux, how to justify the various strands of work, how to forge worthwhile partnerships (for example with European partners) to carry out future projects.

The solution as she sees it is to provide a framework to fit together this massively complex web and disparate shards of information.

One potential solution is the digipedia model  currently under development at JISC, a resource attempting to provide a policy and practice guidebook for digital life cycle from cradle to grave. Have a look here  to see how it works.

Catherine finished by warning of the rough seas ahead, especially when the current economic bad news really begins to impact on the public centre. But then again, she noted, momentum for digitisation is growing. Gains in efficiency have been immense, gains in quality should follow and there’s a genuine desire for collaboration between instittuions and funders.  It’s a good time for investment. So long as those running the projects get even better about showing the impact of their work in plain and user friendly way, and prove it’s worth doing.