Members of the JISC team attended a conference to launch the Nineteenth-Century Serials Edition (ncse): a free, online edition of six nineteenth-century periodicals and newspapers. 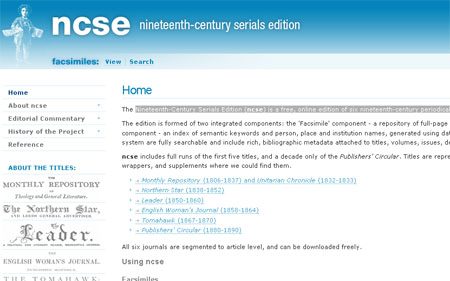 The conference was interesting for a number of reasons, not least because it is in a excellent model for getting groups of end-users involved in discussing and using such resources and actually thinking about the effects they have on their research area, in this case nineteenth-century print.

Patrick Leary, from the Society for the History of Authorship, Reading & Publishing, spoke about the ‘profound changes in the scholarly economy’ that the recent publication of digital resources related to the nineteenth century caused. What, he and others asked, will research look like in five years time.

Others wondered if such changes would be revolutionary or ‘merely’ a huge evolution? There was some gentle disagreement as to whether there should be a push to explore new methodologies (i.e. revolution), or whether we would should make sure that all academics can at least exploit the basics of utilising such resources (the evolution).

In any case, it is apparent that we are really still scratching the surface when it comes to answering these questions.