The 20th century is the period in which advances in medicine and public health led to a much improved life span for the populations of developed nations. The 19th century, on the other hand, is seen as time when only the wealthy could benefit from medicine. This is perhaps an unfair assertion. To be able to verify or refute it, one would need a significant number of publications from the 19th century to hand. The UK Medical Heritage Library will provide the most comprehensive set of such publications ever assembled in the UK. Between 10 and 15 million pages of content will enable the kind of investigations which only such large amounts of data can. We are working in partnership with Wellcome Library and nine digitisation partners to put together this content. Now that we have selected the digitisation partners for the project, it seems timely to provide some more detailed information about the content. In a short series of posts we will seek to provide some insight into the varied nature of this content. Katie Birkwood, Rare Books and Special Collections Librarian at the Royal College of Physicians, tells us something about the material selected for the project.

The Royal College of Physicians (RCP) is England’s oldest medical royal college, founded in 1518 to regulate the practice of medicine. The library dates from the same year; until the 19th century it was not limited to medical subjects, but from that time collecting focused on material relating specifically to the work of physicians.

The collections of the RCP chart the progress of medical regulation, education and practice over 500 years. The 19th-century collections are of value for research into the history of medical theory, practice, training and regulation. They reveal the role of institutions such as the Royal College of Physicians in a century during which the regulation of medicine and licensing of medical practitioners underwent much change. The 19th-century material is primarily medical, but it also valuable in investigating public health and infectious disease in Victorian England, as well as changing attitudes to physical and mental illness, and to criminality. The library also includes books and pamphlets illustrating the wide interests of the RCP’s fellows in the 19th century; including many titles in natural history, evolution and comparative anatomy as well as history and biographies.

The RCP ‘College Collection’ includes a copy of every item published by the RCP itself, as well as books and pamphlets written about the RCP and its work, and by our fellows. It includes a complete run of the texts of the Harveian Oration, an annual lecture established in 1656 by Dr William Harvey. Famous medical men including Sir Henry Halford (1766-1844), William Heberden (1767-1845), Sir Samuel Wilks (1824-1911) are amongst the orators represented. The collection also includes the first (and all subsequent) editions of William MacMichael’s ‘The Gold-Headed Cane’. This is, so far as we know, the only biography of an object in our collections. It’s written from the point of view of a gold-handled physician’s walking stick — now housed in the RCP Museum – which was owned successively by the most esteemed medical men of six generations: John Radcliffe, Richard Mead, Anthony Askew, David and William Pitcairn and Matthew Baillie. 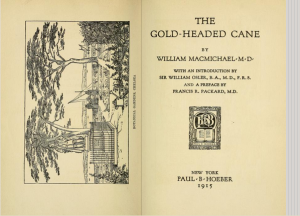 The medico-legal tracts are a series of over 500 19th-century pamphlets on subjects at the intersection of medicine and law. They were collected by Alfred Swaine Taylor (1806–80) and were later added to by Joseph Payne (1840–1910). Taylor was the pre-eminent expert in the field of medical jurisprudence, known today as forensic and legal medicine, and a great many of the tracts are reports on trials and criminal proceedings written for popular or expert audiences. The collection reflects his interest in all medical aspects of legal proceedings, including a great number on poisons and poisonings, as well as pregnancy and abortion, public health, water quality and mental health. They include a report on the celebrated scandal of the trial in 1871 of Thomas Ernest Boulton (1848–1904) and Frederick William Park (c1848–81), accused of conspiring to corrupt public morals by going out in town dressed as women. See our blog post about this.