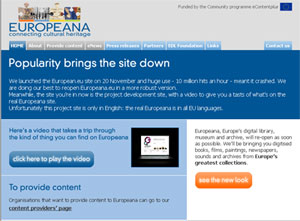 There has been some scepticism about the long-term success of the project, especially in regards to its sustainability model and it’s ability to deflect users away from Google – a problem for any budding portal.

However, two recent events might changes the sceptics’ views.

Firstly, is the overwhelming popularity of the site on its first day – 10m hits, according to the website, with the unpleasant side effect that the site will be down until mid-December.

Recent comments from Google suggest they might be interested on working with Europeana, a partnership that would definelty add to the portal’s impact. It will be interesting to see how this develops.