One of the great things about digitising multiple collections is it allows you to build connections between different resources. Here’s a straightforward example

The John Johnson Collection of Electronic Ephemera has a news-sheet (dated 14 Nov 1807) recounting the murder of two women in the town of Kilmarnock, on the west coast of Scotland. It calls this a “shocking murder and robbery” a “deed of darkness“.

By 19th November 1807, the news had wound its way to London, where it found itself in the Morning Chronicle (part of the British Library newspaper digitisation) 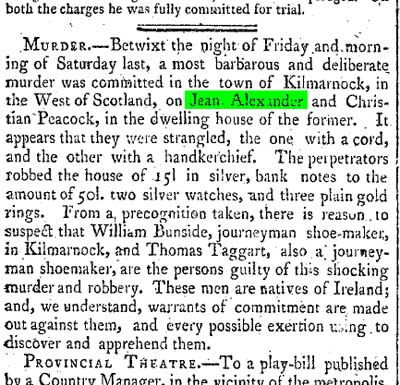 The editor of Morning Chronicle had probably been sent the Edinburgh news-sheet. Several of the phrases that appear in the earlier news-sheet (e.g “every possible exertion used to discover and apprehend them“) appear almost replicated in the newspaper)