As part of the JISC funded First World War Poetry Digital Archive project, the University of Oxford has launched a web site to allow members of the public to submit digital photographs or transcripts of items they personally hold which are related to the First World War. 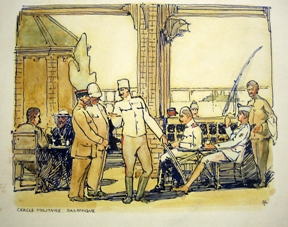 The ‘Great War Archive’ site will run for three months (March-May 2008) and aims to collect together artefacts, letters, diaries, poems, stories that have been passed down from generation to generation reflecting the true experience of the First World War but which are now in danger of being lost.

For more information on how to submit your digital items, visit the Great War Archive web site.

The above image is taken from a sketch book belonging to Percy Matthews. Matthews trained at the Ramsgate School of Art and during World War I he served on the Western Front as a Private in the Kentish Buffs, and later in Salonika as a Lieutenant in the Middlesex Regiment. It was in Salonika that he produced his remarkable sketches of scenes and characters from military and civilian life. The image was submitted to the Great War Archive by Elizabeth Masterman on behalf of Peter, his son. This, and other sketches, have now been donated to the Imperial War Museum, where they are currently undergoing conservation.