“The problems of the world are not going to be engaged with and solved in Faversham, they’re going to be sorted out in cities like Birmingham.”

“I grew up in Birmingham, where they made useful things and made them well.”

There is, prominent in the history and psychogeography of Birmingham – a centre of manufacturing and innovation; the industrial city reinventing itself for a post-industrial age – a streak of pragmatic optimism (or optimistic pragmatism) which came to mind several times during the course of this month’s fascinating and energising DCDC 2019 conference. It is the kind of attitude espoused by native son and famous digital (not that kind) amputee, Tony Iommi of Black Sabbath, who – on the subject of his severed fingers and their likely impact on his guitar-playing – said “I decided to make do with what I had, and I made some plastic fingertips for myself. I just persevered with it.” The epic riffs may be exciting digital infrastructures and the plastic fingertips crowdsourced data enhancement, but taking the resources we have and building practical, ambitious and innovative means to do things not even considered possible was a recurrent and inspiring theme of this year’s event.

Even the siting of DCDC in the ‘Workshop of the World’ reflects practicality and utility – a central location in the middle of the country with (theoretically) good transport links, a vibrant culture and excellent facilities. To expand on Lee Child, it’s not just the things that are made there, Birmingham itself is useful.

As a conference veteran but a DCDC first-timer, I took it upon myself to reflect on what was notable about this event; its content, tone, participants and organisation. And, although the seam is a rich one with endless interesting veins, I’ve drawn out a few key themes to address. 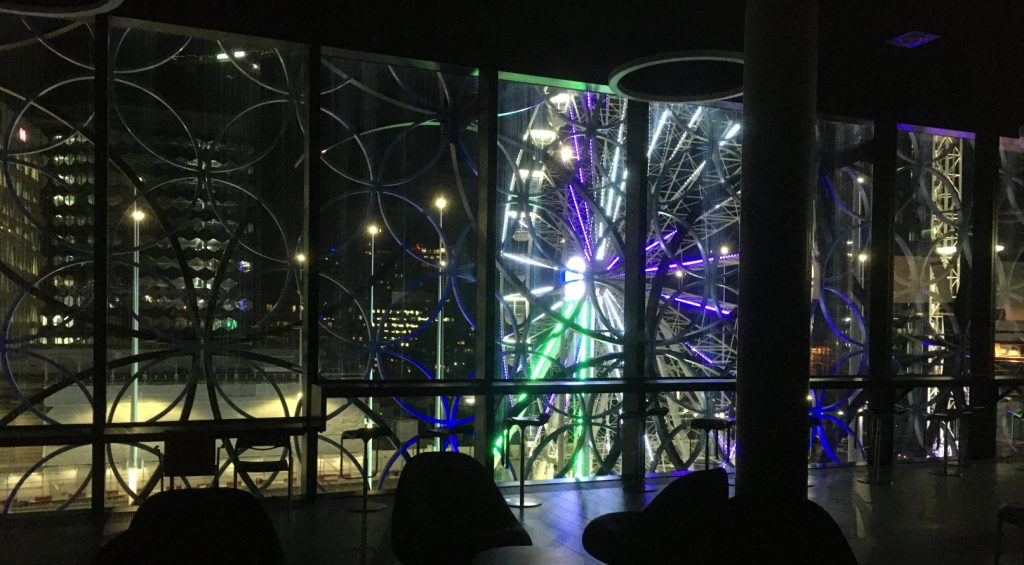 View from The Library of Birmingham at night; venue for the conference dinner [CC BY-NC]

The principle never-in-standby device for this year’s DCDC was the human brain. Nobody travels to a conference to waste time daydreaming and kicking their heels, but the level of engagement was gratifyingly high, with rooms fit to burst, lots of tweeting/re-tweeting/quote-tweeting and always more hands in the air, with more questions to be asked than time allowed for. As someone who once flew across Europe to find himself addressing a literal empty room, seeing people shuffle along the wall at the back of my panel and making room to drag chairs in from outside was equal parts cheering and terrifying. I took comfort from the fact that they were drawn there by my amazing fellow panellists, ahead of whom I was merely a kind of palate cleanser or, at best, an amuse bouche.

Moreover, the composition of DCDC’s audience was excitingly role-diverse, if not (as we were led to reflect upon by Tonya Nelson’s keynote speech) as representative of society as we would all wish it to be. The movers and shakers of the information sector mingled with frontline librarians, local archivists, digital innovators and the technologically curious. There were representatives of galleries and museums, specialists in accessibility, publishers and a number of researchers. The remit and character of DCDC allow and encourage it to occupy a space which straddles the interests of academic research and information provision and management, making it an atypical and highly valuable event.

‘We have more in common than we have differences’

The standard of participants was exceptional, with speaker after speaker demonstrating knowledge, insight and passion about their subjects. Time and again, the conference planners had assembled panels of papers either seemed highly diverse, but then demonstrated clear connections and commonalities, or which appeared to be very similar, only to reveal unique and fascinating perspectives.

It was revealing and empowering to see the overlapping concerns of my co-speaker, Dr Owen Barden – whose work engages learning disabled researchers with medical history – with our fellow panellists Dr Anna Sexton from University College London, whose work on the MIRRA project connects people who grew up in care with their own pasts, and Hannah Smith from the Postal Museum, who is striving to make the experience of the museum accessible to the widest range of users.

Moreover, it was often hard to tell who was who, amongst the traditional conference tribes of librarians, archivists, academics, vendors and more. On one occasion, I temporarily forgot the structural format of the sessions and mistook a scheduled sponsor presentation for an interesting-but-oddly-short paper. Across the whole of DCDC I had a strong feeling that everyone was as enthused as one another and, regardless of role, excited about the building the digital future.

‘You are the infrastructure’

Keynote speaker Prof. David De Roure made it clear that we who ply our trades in the ‘fourth quadrant’ – where growth in both technology and human engagement gives rise to the creation of ‘social machines’ and new forms of research – are all responsible for building and maintaining the environment needed to support these new capabilities in learning and research. For all of the exciting talk of new technologies and ways in which to deploy them, the emphasis remained throughout on human stories and aspirations, from all of the keynote speakers (including Lae’l Hughes-Watkins inspirational talk on the second morning) to Hannah Smith’s vision of a VR dome enabling visitors with physical disabilities to enjoy the same (or better) experience of the ‘mail rail’, to archivists Lynsey Gillespie and Laura Aguiar from the Public Record Office of Northern Ireland, who impressed a packed room with their description of the In Her Words exhibition and related outreach projects to surface the often-buried histories of women in Northern Ireland and to empower women living there today, through events such as Buried in Belfast, to own their shared history and to record and share their own stories for future generations.

This particular project was one of a number of examples which demonstrated the exciting potential for collections and communities (the two ‘C’s of the conference title) to become more closely linked – with the former consciously reflecting the latter and the latter embracing the opportunities presented and no longer hidden away within the former. Like the Borthwick Institute’s digitisation of the visitors’ book from a Second World War NAAFI canteen, with the aid of citizen researchers working on transcribing the evocative handwritten records and comments, archivists, librarians and digital specialists are the cultivators who help bring such projects to life and act as their custodians, as they grow and develop.

Surrounding all of this was the practical experience of attending and taking part in DCDC19. It can sometimes feel as though conference-going is a like a looped GIF, a lived meme of déja vu in a plushly-carpeted purgatory of name badges, tote bags*, crowded plenary talks, conflicting-panel-decision-paralysis and hotel-room tea-and-coffee-making facilities … so it is always pleasing to see something new or different, especially when that difference reflects a few small but positive steps towards an important goal.

One obvious advantage of choosing a venue in Birmingham (that most ‘useful’ of cities) – especially one located two minutes’ walk from New Street station – is the clear alignment with public transport as a means of reaching the event. I have not seen statistics for how everyone arrived at the conference, but am certain that, if they exist, they must show an overwhelming preference for rail. If anyone drove at all, they would surely be in a very small minority. The theme of reduced environmental impact continued with some small but noticeable decisions, such as the absence of plastic badge holders for conference badges, instead making the badges themselves out of card robust enough to endure the 2-3 days of the event (and the dropping of some of the conference dinner onto mine). The exclusive use of washable, reusable mugs instead of hard-to-recycle ‘paper’ cups is also not to be scoffed at, when one considers the epic volumes of coffee consumed at events like DCDC, and was cleverly combined in this case with a promotional, sponsorship opportunity.

My favourite innovation of all, however, was the live close-captioning of the plenary talks – a service which was not directed at my individual needs but from which I found it hard to tear my eyes, throughout any of those keynote sessions. Immense kudos is due to the person or persons providing the captions, as they were having to deal with a lot of technical and sector-specific language (Dear God – the acronyms!) but did so with aplomb and an extremely high rate of success.

All these things may seem minor, in and of themselves, but together build towards a picture of a conference experience that is evolving and which is aware both of the diversity of its participants and of the needs of the world outside its walls.

In closing, I found DCDC19 to be a very rewarding and valuable even to attend. I’m embarrassed not to have been aware of it until very recently but suspect that in part is due to a steep and ongoing upwards slope of impact and appeal – the result of much hard work by its organisers: RLUK, The National Archives and, as of this year, Jisc. Occupying that vital and fluid intersection between information provision and information use, it perfectly encapsulates the concerns and aspirations of many of us working in the knowledge sector and does so with a well-assembled programme of talks, workshops and events, and – just as importantly – brings together a rich mix of individuals and organisations, keen to work together, able to inspire and to amplify one another’s energy, and (one hopes) to set in motion the projects and plans that we will be hearing about at future conferences.

[*Like me, do you have more conference tote bags than you know what to do with? Why not see if you have a local bag share scheme which could benefit from them?]