The recently JISC-funded Cartoon Archive Digitisation project (CARD) has caught the attention of the press recently. 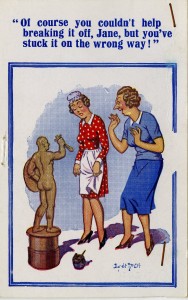 One of the collections that the University of Kent’s British Cartoons Archive will be digitising includes the Director of Public Prosecutions’ archive, which records the prosecution for obscenity of 1,300 cartoon seaside postcards between 1951 and 1961. The other comprises 14,500 political cartoons from British national newspapers and magazines between 2003 and 2011.

Dr Nick Hiley, who heads the Archive, was on BBC Radio Kent this morning talking about the historical importance of saucy seaside postcards (he speaks between 0:16.05-0:25.02).