This was a session based around questions of how universities develop strategies for creating and sharing digital resources drawing on the experience of three experts in the field. They were:     Christine Fowler, Head of Electronic Library Services, University of Southampton; Dr Jessica Gardner, Head of Special Collections, University of Exeter;  Simon Bains, Head of Digital Library, University of Edinburgh. The main points raised were that digitisation projects need to be incorporated into coherent, sustainable inter-departmental strategies rather than just carried out on an ad hoc project by project basis, and that serious thought has to be given to the resolution of the individual scans and how much detail is required by end users. 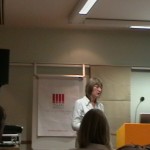 Christine Fowler opened by talking about the large digitisation infrastructure the University of Southampton has built up following two big projects. They have a lab in the basement of their library full of scanning equipment (including one beast worth £400,000 and the size of a small car), an experienced technical and administrative staff base, and a large knowledge base not necessarily available among large companies (for instance, relating to the handling of complex logistical issues (for instance supplying secure transport and insurance for transporting valuable materials).

The question they face now is how best to use all this equipment and know-how. And how to maintain it as hardware and software become obsolete, projects finish and staff migrate creating a knowledge drain. (Christine noted that one of Southampton’s former star developers was actually sitting in the room!)

They now need to formulate a minimum budget in order to survive, while they are looking for material they can scan now and put out now. But, Christine said, just because they have the ability to scan things, they don’t necessarily know what is wanted. Is it their own institutional content? Theses?  Other special collections? Is there potential for third party collaboration in subcontract role? Is it worth engaging in such activity given that brokering deals is such a tedious slow process?

This latter is especially important in terms of sustainability. They have to be secure about who hosts the material. About how to make it future proof. About the long term preservation of master images (which costs a fortune). There is also the “angst of duty of care to your content”.  So they don’t use the direct deal sell and forget model of obtaining images.

So what do they do? Christine left this open-ended, putting forward the dilemma that they want to maintain the system without out any extra at their level… especially given the fact that it’s “credit crunch time” and asking difficult questions like whether it matters that you are producing material for your home nation alone – and  “Why should we be subsidising the entire world?”

She closed by inviting anyone with questions to email:  boperis@soton.ac.uk

Jessica Gardner described herself as a traditional curator going digital and used the example of her work on CHARTER  to talk about the development of an institutional strategy for online delivery of heritage collections.

Starting with example of the Mannequin bird, she described the process one that is non-linear with an awful lot of back and forth. Yes, past digitisation projects have been helpful and useful in and of themselves (she used the example of one student who said  “I don’t know if I felt more but I learnt more from the digital version” when relating to her mueseum’s collections). But no, these projects have not been properly integrated into a wider long term inter-departmental strategy  with top management and academic involvement within the university. So now they are thinking more about effecting a more  collaborative structure that will deliver projects driven by demand and inter-disciplinary. This appears to be functioning well at Exeter as they have been absorbed into a big umbrella department with one head (called ‘academic services’).

She also noted that projects aren’t just useful for the physical results they produce but the “culture change”.  “The end result is important,” she said, “and we will deliver –  but value comes from what those involved learn and how they build on that…  and how that raises vision for digital libraries of the future.” A coherent digitisation process has to be embedded in HE culture. 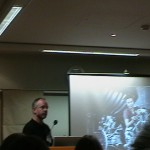 The downbeat nature of Simon Baines’ talk can be easily gleaned from the title he gave it: “Dilemmas, doldrums and delivery – mainstreaming digitisation”.

At the moment, he said it feels like the “tower of books going to collapse for lack of robust and sustainable infrastructure”.

They need to work out how to scale up from boutique projects to ‘critical mass’ , and have coherent strategies in place for only digitising to the quality that users demand and need. They need to accept the good enough approach. And that it might be done again as technology changes. They also need to think about disposing of digital collections.

Of course, all that is especially hard given that “the economy is going down the toilet”. Simon said: “We can’t just  expect large amounts of money. We need to build in sustainability. We need to be as smart as we can with the money we’ve got.”

Simon also stressed the frequently raised point that institutions have to recognise that their websites might not be the point of access for most users and that they need to make sure they have a platform on  google, flickr and co…

He concluded by saying: “The world is going to change wihout you. Get ready!”