A year ago the Library of Congress asked members of the public to tag and describe two sets of approximately 3000 historic photos using Flickr, the photosharing website.  The LOC reports that within the first 24 hours of the project starting Flickr recorded 1.1 million total views on the account, with 3.6 million views a week later, and have had 10.4 million views on Flickr up to October 2008.  Very impressive figures indeed! 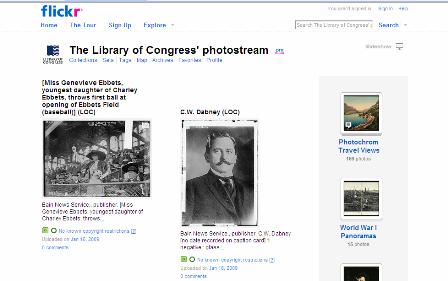 The project was able to stimulate interest not only in the images themselves, and it would appear from the report that the academic and public community were surprised by the depth of cultural and historic resources available at the library.  But the project was also able to prompt interest in web 2.0 technologies and foster an interest in the library and its diverse resources and collections.

The LOC reported that the project pilot had the following outcomes:

More information about the project and the full report can be found at the LOC’s Prints and Photographs reading room. There was also a very interesting article in the New York Times exploring tagging and descriptive metadata in Flickr and Wikipedia.