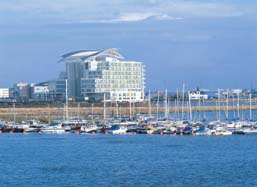 The St David’s Hotel and Spa is situated in the Cardiff Bay area. This is an up and coming area full of activities and sights. There are fantastic restaurants and bars in the inner harbour and the Barrage offers great walks and views of the Bay. There are also plenty of cultural activities to keep you occupied when you are not at the conference.

Read on to discover some of the activities available in the Bay and in Cardiff.

In the late 19th century, coal from the Welsh valleys was transported through the docks to destinations across the world – powering the industrial age and powering Cardiff’s development. The coal industry helped fund buildings including City Hall, the Coal Exchange and the New Theatre and helped the Third Marquess of Bute, who owned the docks, become the richest man in the world at the time.

As Cardiff exports grew, so did its population; dockworkers and sailors from across the world settled in neighbourhoods close to the docks, known as Tiger Bay, and communities from up to 45 different nationalities, including Norwegian, Somalian, Yemenese, Spanish, Italian, Caribbean and Irish, helped create the unique multi-cultural character of the area.

After the second world war the coal industry declined and the docklands fell into disuse, but in 1999 new life was given to the area with the construction of the Cardiff Bay Barrage, which transformed an area of tidal mudflats into a 200 hectare freshwater lake and sparked the development of the surrounding area.

Cardiff Bay, just a mile from the city centre, is now popular part of any visit to Cardiff. Visitors can enjoy a wide range of restaurants, cafes and bars in Mermaid Quay, cruise or sail on Cardiff Bay, or explore attractions such as the impressive Wales Millennium Centre. Regular free festivals and events, such as the Caribbean Carnival and the International Food and Drink Festival, take place throughout the year.

Y Senedd/ Pierhead Building:
This is the location of ‘The Assembly at the Pierhead’, the Visitor and Education Centre for the National Assembly for Wales. Originally it was used to house the Bute Dock Company, and was completed in 1897. Visitors to the Senedd – the Government’s debating chamber, can join a tour of the eco-friendly building, or watch Assembly debates from the public viewing gallery. Next door to the Senedd is the historic Pierhead Building, which contains an interactive exhibition on the role of the National Assembly. (Free entry)

Bay island voyages:
Based within the new Cardiff Bay Barrage, Bay Island Voyages offer you a unique combination of high-speed adventure and close encounters with the local wildlife. Come and see Flat Holm Island aboard this powerful, super fast craft. Call 01446 420692 for more details and to book your place.

Cardiff Bay Road Train:
The road train runs regular trips from Mermaid Quay to the Cardiff Bay Barrage. The tour takes in all the attractions in the Bay, and live commentary reveals the secrets and rich history of the area. (round trip approx 50mins, adult £2, single fare). For Enquires & party bookings call 029 2051 2729

Norwegian Church:
The Norwegian church was first established in Cardiff Bay to serve the large community of Norwegian sailors working in the docks. Its main claim to fame is as the church where author Roald Dahl was christened – today, however, it has been converted into a café and art gallery. (Free entry)

Techniquest:
This is the UK’s leading Science Discovery Centre. There are 160 exciting hands-on exhibits: puzzles, challenges and scientific marvels, to enthuse and amuse the whole family! There are also shows in the Science Theatre and tours of the Universe in the Planetarium. (Entry Adult £6.90, Children £4.80.)

The Cardiff Bay Wetlands:
Public access to the reserve is via a gravel walkway which runs from the car park adjacent to St. David’s Hotel and the mouth of the river Taff. Walk along the boardwalk of the protected area of mudflats and reed beds of the wetlands reserve to see waders and water birds such as herons, coots, and cormorants.

Doctor Who Exhibition:
Doctor Who props, costumes and monsters at the Red Dragon Centre, Cardiff Bay and was recently named the number one attraction in Cardiff. Get up close to a cyberman and a dalek, and see monsters, costumes and props from the recent series of Doctor Who, most of which was filmed in Cardiff. The interactive exhibition in the Red Dragon Centre also features props from the original series, and a Doctor Who shop. (Entry, Adults £3, Child £2, Family £10). The series, and its two spin-off shows, Torchwood and the Adventures of Sarah Jane, are filmed on location in Cardiff, and make use of locations such as the Millennium Stadium, Queen’s Arcade Shopping Centre and Wales Millennium Centre. A Doctor Who locations map is also available from the exhibition and the Cardiff Tourist Information Centre.

Fabulous Welshcakes:
They call their welshcakes “Fabulous” Yum Yum they are right!! as tested by Cardiff Bay hostmaster

Castle Galleries:
If you love art you need to visit this new shop now at Cardiff Bay – very friendly staff

Cardiff Castle:
Cardiff has only been a city for 100 years, but there has been a castle there for nearly 2000 years. Tours of the castle take place throughout the day, or visitors can just enjoy a stroll around the picturesque Castle gardens. (Full tour: Adult £6.90).

City Sightseeing Bus:
Take a tour around the City Centre and the Bay. Live commentary will guide you around 11 stops including Cardiff Castle, The Civic Centre, Cardiff Bay and The Millennium Stadium. Hop on and hop off’ at will. (Adults £7, concessions £5, seasonal operation, check times in advance)

The Waterbus:
The Waterbus offers an exciting 30 min cruise around Cardiff Bay taking in all of the sights, including the opportunity to land (if you wish) for more information Call 07940142409

Cardiff City and around

National Museum Cardiff:
Two wealthy Welsh sisters bequeathed their large art collection to the museum and gallery in the mid 20th century, resulting in Cardiff owning one of the largest collections of Impressionist paintings outside of Paris, with works by Renoir, Monet and Cezanne on display. (Free entry, closed Mondays)

Millennium Stadium:
When the stadium isn’t hosting major sports matches or concerts you can take a tour of the 74,000 seater stadium. Walk down the players’ tunnel, try out the Queen’s seat in the Royal box and discover how they removed the curse from the away-team changing rooms. (Adults £5.50, book in advance)

Creepy Cardiff Ghost Tour:
With tales of the National Museum’s resident ghost, Welsh dragons and even the burial place of Queen Boadicea, the ghost tour of Cardiff’s civic centre and Cathays Park is an informative and entertaining way to explore the city’s rich history. The tour, run by a qualified Blue Badge Guide, is ideal for wheelchair users too, as there are no hills to contend with. (Tours last around 1 hour, adults £5, book in advance)

Llandaff Cathedral:
Llandaff Cathedral in the ancient “City of Llandaff”, is one of the oldest religious sites in the UK. The cathedral dates from 1107, and also features the modernist sculpture by Sir Jacob Epstein ‘Christ in Majesty’. (Free entry)

Castell Coch:
A fairytale castle nestling in the woods on the outskirts of the city. Like Cardiff Castle this Gothic fantasy was created by the architect William Burges for the third Marquis of Bute, a fellow lover of the Medieval and reputedly the richest man in the world in his day.

St Fagans National History Museum:
See Wales in a day at one of Europe’s biggest open-air museums. The 100-acre parkland has over forty original buildings, moved from various parts of Wales and re-erected to show how the people of Wales lived over the last 500 years. Open from 10am – 5pm daily and open Bank Holiday Mondays. (Free entry)

Queen Street:
Cardiff’s main shopping thoroughfare is on the pedestrianised Queen Street, where you’ll find popular stores including Office, Qube and Zara. At the Eastern end of Queen Street you’ll also find the Capitol Shopping Centre, home to designer brand stores such as Benetton, Fat Face and Virgin Megastore.St David’s Shopping Centre:
Cardiff’s main undercover shopping centre offers the choice of over 200 stores and food and drink outlets, including popular department stores such as Debenhams and Marks and Spencer, and chains including the Disney Store, Miss Selfridge and Peacocks.

Arcades:
Cardiff’s arcades still retain many of their Victorian and Edwardian features and are now home to dozens of unique stores and cafes. All manner of Welsh gifts can be found in these arcades, from handmade Welsh textiles to Welsh love spoons and rugby shirts. Visit Morgan and Castle Arcades for the latest designer fashions in independent stores such as Woodenwood or Chessmen, or rest your feet and enjoy a meal in cafes such as vegetarian café Crumbs, or The Plan, which specialises in organic and FairTrade food and drink.

The Hayes:
The Hayes is currently undergoing a face lift and new stores, including a flagship Borders book store, will be opening in 2007. The Hayes is also home to Howell’s department store, where you’ll be able to find everything from the latest fashions and electronic gadgets to Welsh wine and whiskey in the large deli-section; and keep an eye out for the TARDIS, as Howell’s is often used as a filming location for the BBC Wales television series ‘Doctor Who’.

Markets:
Shoppers can seek out the Victorian Central Market – which offers an assortment of merchandise, from fresh fish to traditional Welsh cheeses, rolls of designer fabrics to mobile phones. Another place to visit for locally grown food is the Riverside Real Food Market which takes place on the Taff Embankment every Sunday from 10am – 2pm. For those interested in antiques visit Jacob’s Antiques Market (West Canal Wharf. Tel: 029 2039 0939) or The Pumping Station.

I think you should include the parish church of Central Cardiff as a place of interest.It is the second oldest building in the city centre dating back to at least the 11th century and has a magnificent ‘Somerset’ tower built in 1473. The church is open every day and has a tea room serving light refreshments. The location is Church Street between Working Street and Trinity Street, ie., between St David’s Hall and the covered market.
Thank you.