Despite its ubiquity as a website, Wikipedia is still underused as a mechanism for exposing digitised content. In a recent survey from the Enumerate project only 3% of digitised collections expose their content via Wikipedia.

However, Wikipedia, or rather the suite of platforms under the Wikimedia Foundation, offers universities and cultural heritage institutions a complementary approach to broaden access to the collections and content that they have digitised.

A few organisations have started uploading material toWikicommons, such as Sydney’s Powerhouse Museum and the Bibliothèque nationale de France.

Another way of increasing traffic to digital content is by involving subject experts in creating, editing or enriching Wikipedia pages within their own subject discipline, as organisations such as Cancer Research UK , The Geological Society and lately JISC have done with support from Wikimedia.

This not only improves the quality and reliability of the content hosted within Wikipedia but can help surface content from relevant digital collections.

This interesting blog post on how the University of Manchester’s John Rylands Library has engaged with Wikipedia and a network of contributors gives some idea of the benefits this can bring. A number of references to the John Rylands collections are now present in Wikipedia entries, including a whole entry focusing on one specific item, the Rylands Library Papyrus P52, “also known as the St John’s fragment (illustrated) which ranks as the earliest known fragment of the New Testament in any language”. 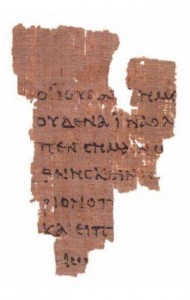 Recognising the value of such collaborations, the AHRC has funded a Wikipedian in Residence based at the British Library.

Over next few months, Andrew Gray will be working to help establish ties between the Wikimedia community and staff within institutions who are interested in contributing expert content to Wikipedia.

As part of the residency program, Andrew will be running a series of workshops around the country aiming to provide training and support to specialists who are interested in contributing to Wikipedia or other Wikimedia projects, or learning more about engaging and collaborating with the Wikimedia community.

So, if you’d like to know more about the programme and how expert Wikipedians could help you raise the profile of your digital collections, you should contact Andrew – andrew.gray AT bl.uk.