Just in case you hadn’t heard, seen or talked enough about the Queen’s Diamond Jubilee, a recently launched JISC-funded website, Media and the memory in Wales, has collected people’s memories of seeing the coronation of Elizabeth II on television in 1953. 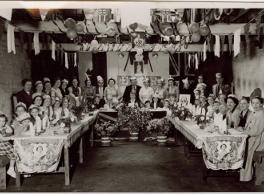 The coronation of Queen Elzabeth II in 1953 was one of the key events that inaugurated the age of mass television in Britain. It was the first large royal event to be televised. For many in Wales and elsewhere it was their first experience of seeing television at all. The coronation therefore played an important and formative role in defining the way television recorded national events.

The project, lead by Aberystwyth University, recorded oral histories of people from different part of Wales about what television meant for them, their families and their communities at a time when it was rapidly becoming the main medium for the consumption of popular culture and national and international news and current affairs.

Among other themes covered by the project include the Devolution referendums, the launch of S4C, the Welsh language television channel, and the golden age of Welsh rugby.