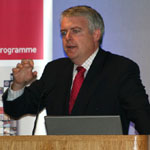 The JISC digitisation conference was opened by Carwyn Jones, now Counsel General and Leader of the House in the Welsh Assembly Government (you can read the live blog of his well-received speech here). He also gave a short interview to JISC’s Philip Pothen before the speech, and it is now available to listen to as a podcast. At the time, Carwyn Jones was Minister for Education, Culture and the Welsh Language and in this podcast of the interview he gives his thoughts on the importance of ICT to Welsh education and explains how the Welsh Assembly Government is working to widen access to digital resources to support education and the promotion of Welsh culture and language.

Listen to the podcast here