In these times of economic hardship and ever decreasing household budgets, it is always good to remind ourselves of times when money was extremely short.

The archives of Gala, Miner’s and Crystal, three prominent cosmetics companies operating during and after the Second World War, are held at London College of Fashion and have been digitised and made freely accessible through the VADS website.

The archives are a valuable resource for the study of the history of cosmetics, advertising photography, fashion promotion and women in the Second World War. 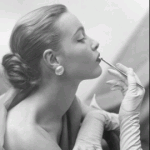 One of the company’s in the archive, Gala of London, was also the first company to introduce lip stick in a tube when they introduced their lipline in 1957.

During the War when silk was needed for parachutes and stockings disappeared from the shops, Miner’s had particular success with its leg make-up, Miners Liquid Stockings,allowing women to draw black lines down theback of their legs to simulate the seams. 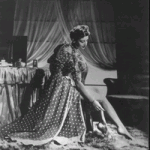 The three cosmetics archives have been digitised by the London College of Fashion and made available online through the ‘Enhancing VADS’ project,  funded as part of the Enriching Digital Resources programme from JISC.